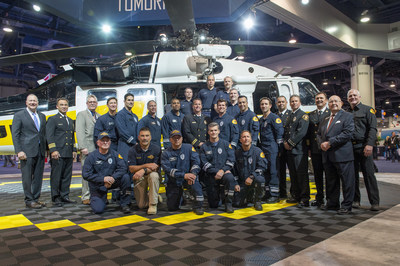 In December 2000, the L.A. County Fire Department became the first municipal organization to purchase FIREHAWK® helicopters. Today, they operate three of the aircraft in the wildfire-prone region, and have purchased two additional FIREHAWK aircraft, currently in modification, expected to enter into service by March of 2019.

“During the catastrophic fires in L.A. County and our neighboring counties of 2017 and 2018, our firefighters relied heavily on an arsenal of firefighting aircraft, which included the FIREHAWK helicopter.  Flying missions, day and night, the FIREHAWK enhances our fleet strength and strengthens our aerial firefighting capabilities… ultimately improving our ability to protect the lives and property of our citizens,” said L.A. County Supervisor Kathryn Barger.

By its end, the fire season resulted in over 1.2 million acres burned across California. Although 10,804 structures were destroyed and 46 lives claimed, ultimately thousands of homes and lives were saved. The L.A. County Fire Department Air Operations answered the call to service, flying in the FIREHAWK to fight back flames, and protect the four million residents of L.A. County.

In recognition of these achievements, Sikorsky presented the L.A. County Fire Department Air Operations with the Winged-S Rescue Award. Created in 1950, the award honors those who perform rescues flying a Sikorsky helicopter and acknowledges the humanitarian efforts of pilots and crewmembers who put themselves in harm’s way to save others, fulfilling Igor Sikorsky’s vision of the helicopter as a lifesaving machine. In addition, the Superior Maintenance award was bestowed upon the L.A. Fire Department’s Maintenance Section for their superior performance in maintaining and supporting the FIREHAWK’s mission.

Sikorsky also donated $15,000 to the FCSN. Founder Michael Dubron is a firefighter/paramedic for L.A. County Fire Department assigned to flight operations. Diagnosed with cancer at age 39, Dubron recovered and returned to work, and founded the FCSN to help firefighters and their families obtain immediate assistance when coping with a cancer diagnosis.

Headquartered in Bethesda, Maryland, Lockheed Martin is a global security and aerospace company that employs approximately 100,000 people worldwide and is principally engaged in the research, design, development, manufacture, integration and sustainment of advanced technology systems, products and services.

The L.A. County Fire Department’s mission is to protect lives, the environment, and property by providing prompt, skillful, and cost-effective fire protection and life safety services.  From initiating a paramedic program in the 1970s to pioneering swift water rescue techniques, the L.A. County Fire Department is a leader and a model to fire departments around the world.